I can't believe the first month of 2010 is already over. I spent the first week of January in Florida however upon my return to the "Great White North" I decided to take full advantage of our winter season and was able to mark a few "FIRSTS" (as in first time doing something) while I was at it. 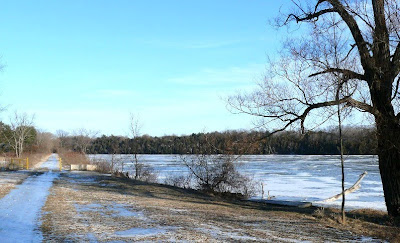 Sydenham Lake after the thaw and refreeze
My first "FIRST" was finally getting up the gumption to run on the frozen lake just outside my front door. It was my first day home from the warm South but surprisingly the -10 degree weather didn't keep me from looking forward to my first snowshoe run of the year. As I was starting down the trail I noticed a snowmobile heading out onto the lake, I decided to follow. After my first few steps it all felt so natural...or is that surreal. There I was heading out to the middle of the lake where I had been aqua-running only a few months before. My friend's house which had always seemed so far away on the other side was now only a hop, skip and jump away. The lake was completeley snow covered and flat except for the tracks left behind by various types of vehicles.  The hard crusty snow made a perfect surface for the cleats on the snowshoes to grab onto and I found myself travelling at a much faster clip then I had imagined I would be. Running so effortlessly on the frozen surface I almost forgot what was below me...deep, dark, cold water. Then there was a crack, and a slump in the ice under me. I began to tip toe, as if that would help. I pictured myself immersed in the deep, dark, cold water the very image that had kept me from lake running before today. But alas all was well, just some snow layers settling perhaps. I met some skiers who said the ice was probably 6 inches thick and had been well used by ATVers, skaters, ice fishermen and their trucks so one lone snowshoer was surely safe. I finished my first run on the lake running towards the setting Sun. I was grateful I had taken the plunge onto the ice and especially grateful it was not into the deep, dark, cold water which undoubtedly would have marked my first "FIRST" of  2010 as my last. 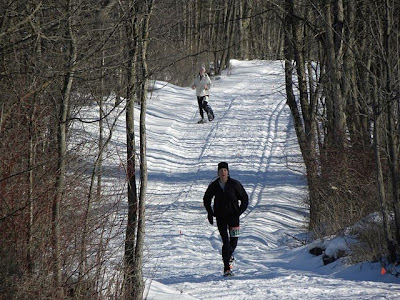 Thank-you to the photographers at the race for my snowshoe running pics
My second "FIRST" of 2010 was running in a snowshoe race. It was the "First Annual Dion Frontenac Snowshoe Race". I was third in my second "FIRST" : ) Perhaps I will be second in my third "FIRST" whatever that may be. Other "FIRSTS" I am looking forward to is my first 1 mile road race, "The Limestone Mile" and my first track race as an adult, race to be determined.
I hope to make 2010 a year of "FIRSTS" as I have had a good start at it so I think I will just keep it up.
Wishing you all many "FIRSTS" of your own this year.
EJ
Posted by Eliza Ralph-Murphy at 4:28 PM

Ha ha. I was thinking K-Rock the radio station, but then I clued in.