This report is a bit delayed as it took be sometime to chew, swallow and digest my "HUMBLE PIE".
I went into this race with specific time expectations so falling short of them really affected my overall veiw of the ultimate outcome. My goal was to start out slow and not to go out too fast like has been my habit. Actually my goal to start out slow is nothing new it is just that I have never actually accomplished it in previous races. This race was different though as I was a bit under confident in my ability to hold my intended pace of 4:30-4:35 for the entire 8kms.
The first km was a breeze and I did indeed keep to my 4:30 pace and I felt as I was at a slow gallop loping down the trail. This form actually felt so good that I held it for the next 2km which in hindsight was a mistake as I actually slowed down a bit to more af a 4:40 pace. For the first part of the race I was changing places with a couple of master's women runners including Kimberley Bohn and Shirley Mires. I knew both of these runners however neither knew of each other or myself and I am not sure if that was an advantage to me or not as I was quite intimidated by both of them. Shirley took the lead and Kimberley breathed down my back until we were coming to the 5km mark when Kim pulled out from behind me in an amazing example of downhill racing and flew by me with no mercy. This caught me by complete surprise as I was quite tired by then and feeling her speed by me seemingly effortlessly down the hill was quite the demoralizing experience. It was as though she had this huge reserve she had decided to unleash and I was left to struggle through my growing fatigue in her wake. It took me a bit of time to regroup and get my fight back and I set out to catch her for the next 2.5 km. Although I was never able to close the gap I had to take not letting her open it much further as my consolation prize for the day and I finished 13 seconds behind her with an average pace of 4:40.
Looking back it really was a great day to race two amazing competitors on my home trail and I learned alot about racing during the course of it.
8km Race Times-
2005 Beat Beethoven 52:?? minutes
2007 Sydenham Fall Run 44: ??
2008 Sydenham Fall Run 40:16
2009 Sydenham Fall Run 37:25
Nice to see all my hard work is paying off and truely it is in more ways then just a faster time.
I learn so much from every race about running, racing and myself. Sometimes I see the good side of me, sometimes the bad side. It is very important to see myself from both angles as it helps me to determine my future path and future goals...and again not all of them running related.
Posted by Eliza Ralph-Murphy at 9:40 AM 4 comments:

Thanks to Derrick and Sara and all of the volunteers for putting on such a great event. I will write more about it when I get time.

It was also fun hanging with David and Kim after as well. Here is a picture as proof. 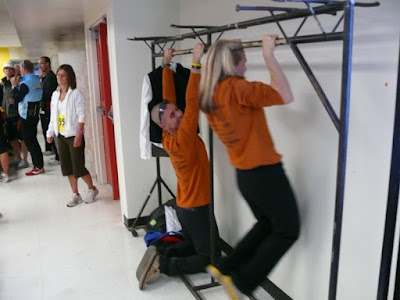 Hanging out with David and Kim 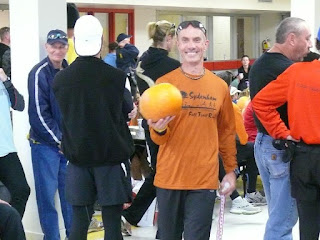 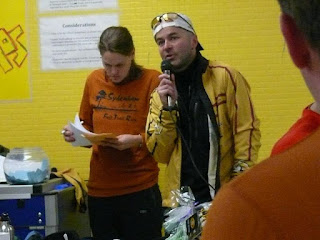 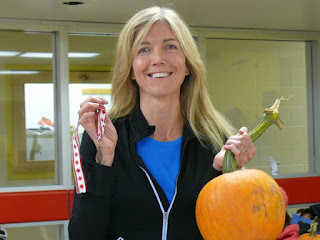 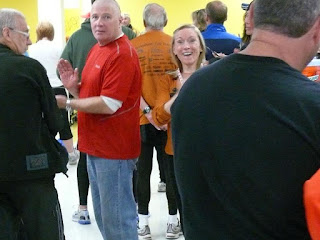 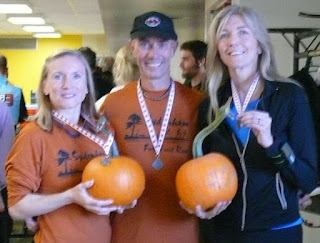 Kim, David and Eliza and pumpkins

This is an unedited video my Mom took of the race. You will note at the beginning Derrick is giving race instructions to the 200 runners then he is off on his bike to lead the mass of people to the race course along Sydenham Lake. You will then see Derrick and the lead runners running up the trail across the lake. At the finish Kim races in ahead of me in pink and it is nice to hear all the cheers of my name as I cross the finish line and pose for a picture with official photographer Sara.

A Sneak Peak at the Sydenham Fall Fun Run Trail 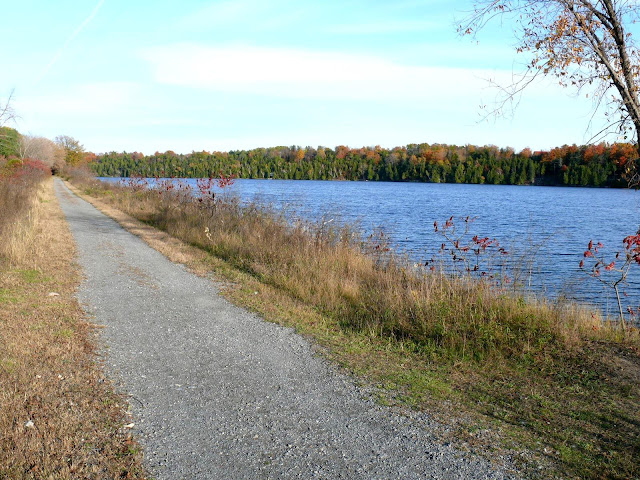 I went for a nice meandering walk on MY TRAIL today and took some nice pictures of the fall colours currently being displayed around the lake. This section of the trail is in really good shape for the race tomorrow and I suspect the rest of the trail is in similar shape.

Good Luck to everyone running this year and I hope to meet some of you at the post race festivities.
Thanks in advance to Derrick and Sara for putting on this great event year after year.
Posted by Eliza Ralph-Murphy at 3:24 PM 1 comment:

NEXT Sunday there is going to be a race on MY TRAIL! Every year a couple hundred people go trotting down MY TRAIL without even knowing that they are trekking on my territory. I can only hope that some will take a few seconds out of their fast paced race to recognize MY TRAIL'S beauty and grace.


At least I know the ones that don't care will be packed up and be on their way back home by late lunch time and the ones who saw something special might think of her now and again and may even be drawn back to appreciate her another time the way I do every day.
Posted by Eliza Ralph-Murphy at 12:57 PM No comments: