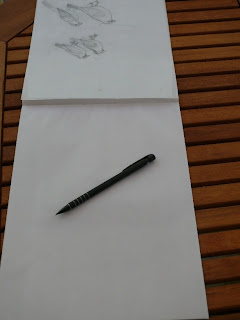 Sitting down in front of a blank page is a fearful thing for me. I know if I dare to make a mark that I must be prepared to see the truth as it is revealed to me in graphite. No matter the outcome though I am always amazed when I am able to make something from nothing.
That blank page in my sketchbook is very much like the starting line of a race. The race course is the white void of the paper waiting for me to put my mark upon it. Every step is a stroke of my pencil and as the outline of the race takes shape the final picture is revealed when I cross the finish line.
In the end all I can do is look at what I have created, see the truth that was revealed and take some pride in the fact that my sketchbook now has one more picture and one less blank page.

It has been a few days since Emilie's Run and it is hard to believe that the race that was so much of my focus for the last year has come and gone. There was no fanfare, no rockets in the sky, no jubilant celebrations. Instead the day played out more like this;  it rained a bit, I ran for 22 plus minutes, I stuck my foot in an bucket of ice. The good thing about how all this played out is that it has helped me put things into better perspective concerning the mental energy I have been directing towards my running. I am really looking forward to spending the summer exploring my many other interests and hope to have many adventures to report about over at The Meandering Trail.
Posted by Eliza Ralph-Murphy at 8:19 AM 3 comments:

"Emilie's Run" had a strange vibe for me. I was there to run a race but could not help but think about how Emilie Mondor was running and winning this very race only 5 years ago a few months before the car accident which took her life. I felt at odds with my reasons for being there and the celebration of that life. The two events did not gel for me because running a race in honour of someone should be joyous where as I was more wrapped up in the anxiety of racing well. With my ankle and calf being sore I was struggling to hold on to my optimism as I was becoming quickly aware that my running gait had been reduced to a lopsided mess. I tried not to think about the discomfort which was causing me to favor the sore leg and hoped I would be able to run through it. I was well warmed up and managed a few more short strides before the start then lined up as close to the front as I thought reasonable. I did not hear the start but everyone began running so I did also. It was raining but I barely noticed and it was not a downfall by any means. I noticed I was out fast after 200m so began to hold back a bit and found myself running with the same people for most of the race. I made it to the halfway at 10:38ish(this is where we turned around but I am not sure if it was actually halfway?) if I remember correctly and thought I was on pace for a good race. I held off a few challengers then began to pick off runners. I looked at my watch and saw 4:16/km at around 3km. I really had no idea that I had slowed down and was actually running 4:30ish/km. There were so many people around and I was not being passed so I assumed I was still on pace. I checked my watch at 4km when I was really tired and realized I had lost a lot of time as it was around 18:38ish. I tried to do the math and realized I on was on pace for 22:40ish again or slower. WTF. A few girls challenged me again and again I held them off as I made my way towards the tents and the finish I heard my Mom call out my name and I saw the timer was 22:30ish and crossed at 22:41. My Garmin says I ran 5km in 22:20. Thinking back I realize having so many people around me mid race kinda kept me running at their pace. Also between 2.5 km and 4km I thought I was running at approx. 4:16/4:20/km and could not make up the time at 4km although I tried to my legs just did not pick up the speed with the growing limp and fatigue. I tried to run a cool down after the race but was limping quite bad and after the knee pain kicked in(probably due to compensating) I thought it best to stretch and walk it out. After making my way back to the tents I checked the results and was shocked at being 4th in age. I didn't have anywhere to go so stayed for the awards which began with a speech by a man who I believe was Ken Parker(race founder) and Emilie's Mom. It has been 5 years since Emilie's passing and Ken was still brought to tears speaking about her and there was not a dry eye in the house afterwards.

As much as this race celebrates Emilie's life I realized in seeing the depth of the sorrow in Ken and Mrs. Mondor that we are remembered by those who knew us or of us but we are missed by those who loved us.

Today I really feel a tightness in my calf/soleus and it seems to be the root of the cause for the sore ankle/achilles.

One thing about this race is they really go all out picture wise which is a good and a bad thing. My daughter had fun going through my pictures and telling me which ones looked good and which ones DID NOT. Here are a few of her pics for "GOOD".
﻿﻿﻿﻿
﻿﻿ ﻿﻿﻿﻿﻿﻿
﻿ ﻿
﻿

Tomorrow, Tomorrow, I love ya, Tomorrow, You're only a Da-a-a-a-ay... A-a-a-a-a...Wa-a-a-a-ay!!
I really love to day dream about Tomorrow. Tomorrow is full of conquering my fears and fulfilling my dreams. Tomorrow keeps me hopeful. Tomorrow never let's me down. Tomorrow is always there waiting for me to hurry up and arrive so I can turn all of my fantastic visions into reality. This Tomorrow I race another 5km. This Tomorrow holds my destiny in its hands. This Tomorrow is beckoning me and I am counting the hours and minutes until I can embrace it and live in it. This Tomorrow promises to be a wondrous, beautiful, glorious day. This Tomorrow is my 47th Birthday. Happy This Tomorrow to everybody. I hope yours is as magical as your dreams envision it to be.
PS
No I did not smoke anything funny before writing this blog. I am just feeling excited about Tomorrow is all;-)
Posted by Eliza Ralph-Murphy at 8:04 AM 3 comments:

Chip time- 36:56 which was a PR by 11 seconds
Thank goodness Stacey was running strong today because she kept me running hard the entire distance and helped me run a PR and win 2nd in my age(which was a 10 year age group) so I was happy with both of those accomplishments today. I ran a very even race pace wise and at approx. the same pace as I ran my 5km a few weeks ago so it is nice to see that my training is taking hold and my fitness is building. Hitting the 5km mark was tough for me as mentally I was done however the old legs still had some gas in them and carried me to the finish line despite what the rest of me wanted to do.
Note: I believe my first official race ever was The 2005 Beat Beethoven 8km where I placed 480th out of  543 runners in a time of 51:52(I didn't beat Beethoven). Today I was 69th out of 512 and almost exactly 15 minutes faster;-)

PS- lest I forget to mention I wore a HR monitor for the first time in a race today. I wore it on my long run with Tammie last weekend and for the 16km my hr jumped between 140bpm and 160 due in part to the many hills on the course with an average of 150bpm for the run. In my one interval workout of the week I was running in the mid 170's bpm for my repeats and topped out at 181 which was pretty much the same for my race with an average of 175ish and a max of 182 although I think my true max might be a bit higher but I will have to wait and see about that. Here is a link to the data my Garmin collected from the race including HR, pace etc. Kinda cool to see.
Posted by Eliza Ralph-Murphy at 5:35 PM 4 comments: