The picture and the text really do speak to me concerning this coming weekend's race. It's as though I drew  it myself! Thanks Bryon for the advice although my coach has been saying it to me since Day 1. The 3 gals I should not see behind me are Shirley, Myra and Margarita. I will make sure to line up well behind them; )
Posted by Eliza Ralph-Murphy at 6:56 AM No comments:

Prepare for the Worst, Hope for the Best!

I am running in the Limestone 5km this Sunday. I have no idea what to expect as I have had some injury issues of late which have just resolved themselves this past weekend. I had a great training season through the winter and a few good training runs this spring but not nearly enough of them for me to feel confident about racing this Sunday. I know my mind is strong but I am not so sure if my body is willing so I need to put aside my grandiose dislussions and accept the hand that reality has dealt me. What the F&%K does that mean? It means I can't bluff my way through this race and go out as though I am going to run a 20 minute 5km without some consequences. I have to go out as though I am going to run a 22:30 5km which is 34 seconds slower then last years time. If feeling good at 3 km then I will have a good 2ks remaining to pickup the pace and makeup lost time. The first 3km of this race will probably be and historically has been run into the wind. It will be during the last 2km that I will be able to test the legs and the heart to see what I have left inside.

It was two years ago during this race when I was challenged at the 3km mark by a fellow masters runner. As she passed my shoulder I had to decide to let her go or go with her. It took me a few strides but something inside me told me to catch her and I did. Since that race I have found myself at that very spot on that same road hoping that no one would challenge me the way Stacey did. I just hope I don't feel that way this year and if I can go out at my intended pace than I should be in a good place to answer any challengers. That is what I am calling the "Best Case Scenario".

I am however also preparing for the "Worst Case Scenario". That scenario would have me hitting 1 km at 4:15 or faster and feeling my legs get heavy along with my breaths and my heart. I will probably look to the side of the road for a place to quit without being too conspicuous about it. If I get thinking about quitting then I will immediately give myself  1 minute to recover by slowing down considerably. I will breathe through my nose and wait for the oxygenated blood to return to my brain. Then I will restart the race again in my mind and see if I can arrive at my magic 3km mark ready to race the unfortunate soul who attempts to pass me. OK that is not exactly the "Worst Case Scenario". The worst case would be arriving at the magic 3km point and still be looking to the sidelines for a place to stop and lie down, letting runners pass me by unchallenged and feeling really bad about it but not able to do anything to stop it. If that is the way it plays out then I will resort to thinking about my form. Taking my mind off of the race and just thinking about putting one foot in front of the other will be my fall back, "Worst Case Scenario" plan. If it all comes to that then the last 2 km will seem like an eternity and crossing the finish line looking at the timer will undoubtedly be a hard pill to swallow. Unfortunately it will be a bitter dose of necessary medicine because getting this race under my belt should have me in a better place to train hard for my goal race on June 25th.

I hope to avoid the "Worst Case Senerio" at all cost but I am none the less prepared for it. Let the games begin.
Posted by Eliza Ralph-Murphy at 5:21 PM 4 comments:

Mr. Disappointment and The Nugget of Wisdom

Last week I had a little setback. At the time it seemed like it might turn into something huge and I could feel the disappointment trying to encapsulate my entire being. It is hard to deal with disappointment especially when you have a plan set in motion only to see the whole thing go up in flames when the unexpected happens. Which is why my friend Mr. Disappointment came a calling when a whispering nagging hip thingy turned into an roaring exploding hip thingy in the middle of a tempo run last Friday. A part of me wanted to become desperate and panicy about having to deal with another injury however another part told me not to sweat it. But why? Why did I not get worried about this setback the way I usually do? "It's elimentary my Dear Watson", you see I have been there before, "Been there, done that". I have learned that disappointments and set backs are par for the course if you are going to be a serious runner. It happens to everyone, the disappointments, the setbacks, no one is immune but how you deal with it separates the new guy from the seasoned pro. Simply stated when you are starting out you just don't get it, there is no perspective, no past events to put things into their proper place. But the events of last Friday showed me that I do now "Get it", and that can only mean one thing, (dare I say) that somewhere along the line I had become a seasoned runner and not the way I ever expected to. The title wasn't handed to me as a medal around my neck on a podium but rather it was seared with pain into my burning hip unceremoniously so when I was forced to stop running last Friday. In the midst of the uncertainty I didn't panic, I didn't think my career was over, I didn't say, "Oh well maybe running isn't for me", I didn't worry that I was not going to be able to run for the next few days or even weeks because I knew that no matter what it was, I would wait it out. I would heal it, baby it, pamper it, strengthen it, massage it, roll it and stretch it as much as it needed and that I would be back to run another day. What set me apart from the newbie runner I had once been was that I now had the benefit of perspective, a coming together and understanding of my collective experiences, a "Nugget of Wisdom" found when I wasn't even looking for one.

Let's break that all down then. If you want to win more you gotta fail more. With every failure comes disappointment but if you can find a means to deal with it, learn from it and carry on then you too can become like all of those runners you thought possessed some magic you did not. Don't let your next setback or disappointment make you fearful and lose hope and know that you are on a journey of learning no matter what your discipline may be, "Nuggets of Wisdom" are out there, in every experience and when you least expect it one will jump up and find you just like the one that found me.

And now for something completely different...
Imagine yourself at a race in the future(a small local race, a regional race, the Boston Marathon, Western State), the RD is getting ready to give the race instructions and you find yourself moving towards the front of the pack. You know where you need to line up and you aren't there yet so you inch your way up, saying, "Excuse me", "Pardon me", keeping your head down trying not to step on peoples feet or note the annoyed look of those who's position you have usurped. Then you finally find it, that just perfect spot and you look up only to be staring directly into the RD's eyes and do you know what???!!! You don't see him/her questioning why you have ponied yourself all the way up into the front of their race because both of you know that that is exactly where you are suppose to be, "Runners take your mark, BANG!!"

I also know that not everyone runs or races to win and that reading my little story about accepting disappointment might make my idea of racing seem like a dismal way to spend ones time. I realize that racing to win and racing for fun each has it's place which is why I came up with this little quote for myself.

There are only two ways to Race,
Racing for Fun and Racing to Win.
Know which one you are doing,
Then do it with No Apologies.(Then do it unapologetically)(Then do it without Apology) I'm working on it.
Posted by Eliza Ralph-Murphy at 10:45 AM 9 comments: 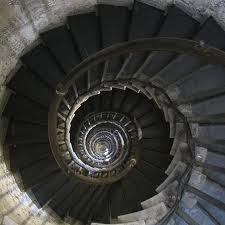 Once again I find myself in this very old house with a spiral staircase. I look up and cannot see where the staircase ends as it appears to go on and on so I begin to climb it. Looking up as I climb I do not notice the many people behind me who are now also climbing the staircase. After some time I become aware of the others and I wonder if they know where all this is leading to but I do not ask. We continue to climb looking up and no one speaks as the stairs begin to narrow, the turns of the spiral begin to tighten and I begin to get pushed from behind by the force of the others. The walls are closing in and I realize we are climbing some sort of tower and that we must be near the top now because the stairs are much too narrow and the walls are much too close but the others are still climbing and I begin to panic. My stomach sinks and the horrible truth becomes clear that I am trapped and being pushed up into a soon to end stairway. The tower is so tight now and there are no more stairs to climb. All that is infront of me is a long wooden tunnel and I don't want to go in but I cannot turn around so I crawl in. The tunnel is rectangular like a box and I can see it is narrowing and I feel it is narrowing and soon it is so narrow that I can barely crawl but I am being pushed further into the long narrow wooden box and I see the end is coming and I am afraid. I reach the end and I know there is no escape because the ones below are still pushing forward up the spiral staircase unaware of their destination. But I know where it all ends and it is too late for me, unless they stop, please stop I cry silently, please stop pushing. But I know they cannot hear me. Then I wake up.
Posted by Eliza Ralph-Murphy at 11:39 AM No comments: