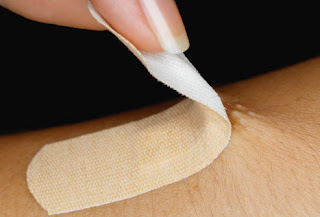 Like ripping off a band-aid, I needed to get this race run as quickly as possible, suffer through the pain and take it like a woman. Derrick's words of wisdom for me leading into the race were to, "Get comfortable with being uncomfortable again". I understood exactly what he meant because that was precisely what I had been building to for the past 4 weeks as I ran the pace specific interval workouts. However, as uncomfortable as running 3 x 3 minute sets are, a 1-2-3-3-2-1 ladder was, and a 9min progressive interval at race pace can be, holding that pace for a 5km is an entirely different level of "uncomfortable" that I have not courted for some time now.

As most of you know, being at that particular level of discomfort is not pleasant but it is a necessary evil and an evil that I willingly signed up to put myself through. So pretty much from 1km forward into the race my body was screaming to stop even though my head knew I had to keep moving forward and, "rip this band-aid off". It really wasn't until I hit the half way point when I gave up on any hope that I might stop running and walk back to my car and became fully committed to finishing that I found myself becoming, "comfortable with being uncomfortable again".

One could say that at the moment I became a captive participant in the race with no hope for escape I was forced to get comfortable with another level of discomfort that is almost impossible to tap into during my everyday training runs. In ripping off that band-aid of comfort I am now ready and set to discover new levels of sustainable uncomfortableness. Yeah for me, I think!??

I'm still here and still at it.

Hello everybody, just popping into Blogger World to let you know I am still here and still at it. I have been training consistently and pretty much injury free over the winter and now into spring. Building upon last years late summer and fall training I continued to up my long runs throughout the winter and soon found myself running on the trails and hill laden roads in the Gould Lake Conservation area. I eventually worked my way up to a 3hr. run covering 25kms and with some nice climbing thrown in. It was great to take my running to a new level distance and time wise and with the added bonus fun of tracking my elevation gains I can easily see how people get addicted to this stuff.

In January I ran in the 3rd Annual Dion Snowshoe Race held in Frontenac Park. I was happy to place 7th female and taking a bunch of minutes off my previous years time although the near perfect snow conditions certainly helped out there. The snow had just fallen a few days before and the conditions could not have been more perfect for the race. Unfortunately we didn't have alot of snow for the remainder of the year so the snowshoe season was brief and all subsequent races in the series were cancelled. The race itself was well suited to my training in Gould Lake and I was able to run every hill where in years past I had walked a few. I fell in with a great group of women early in the race who pulled and pushed me every step of the way through the single track course and it was perhaps one of the most enjoyable and satisfying races I have ever run.


The early spring weather soon had me springing into my 5km training mode again. Derrick began to give me pacing rather then heart rate targets for my tempos and it took alot of work to inch those paces down. Some days I thought the legs were never going to come back to spinning the way they had only 8months prior. It really gave me a new respect for anyone who trains for long distances but races the shorter ones as well. The short distances really do require speed specific training to get the legs back into quick turnover mode and those early interval sessions were tough on my confidence and just plain butally tough. Luckily I have a coach who knows all of this and slowly but surely week after week, tempo run after tempo run, interval workout after interval workout he/we were able to inch those paces back down to where I am feeling hopeful about running some good 5kms this year.

Speaking about 5kms, I will be racing in my first one of the year this Sunday. I have expectations for the race but unlike previous years they do not revolve around what the clock says when I run over the mat at the finish line. The expectation or goal that I have for this race is to run it, to feel it, to respond to it, to live it. I won't be wearing a watch to tell me how well or not well I am doing so all I will have is my perceived effort, my gut instinct, my inner voice to guide me. I feel like I have so many things to still learn about racing that I can only learn by getting into one and giving it my all and be willing to learn and maybe make a mistake but also hopefully gain some insight or a speck of wisdom I can carry forth with me to the next venue.

It is time for the Limestome Half/5km again. I am experiencing major De ja vu as this will be my 4th time running it. Those past races have become blurred together in my mind, like 3 projector overlays one on top of the other as though they somehow happened simutanously in time. I can see myself  lining up in my first race not knowing the course at all and then also in my 3rd race knowing exactly what to expect. I can feel my legs going out too fast in my second and at the same time going out too slow in the third.  I remember coming to 1km and feeling strong and raring to go but I also remember being depleted and wanting to pull over. Running around the point I have a mouthful of bugs and yet am then smiling to myself that I have avoided the little buggers as I witness another runner gag. Being passed by a masters runner at 3km teaches me to dig deeper then ever as I am hoping she doesn't show up to repeat the challenge this year, I am turning things around and becoming the challenger myself.  I am racing towards the causway with 1km to go and have emotionally checked out and switched to autopilot mode and yet there at the same point in the race on the same stretch of pavement seemingly at the same point in time I am also more fully aware then ever , battling side by side for a place in my AG as I run all alone racing for a new PR.

I would love to tie these up into a nice little box, put a bow on it and have it all make sense for you but I haven't figured it all out myself. On one hand I think my mind is trying to put together the perfect race for me by taking pieces from each one and comparing it to past and subsequent races but upon further reflection I am also seeing another explanation for this time/space confusion. I have no doubt that we can learn from our mistakes and by some extent we have control over how our race plays out and can plan for it. But planning ahead is one thing, executing your plan is another and that is where the variables come in.
Posted by Eliza Ralph-Murphy at 10:27 AM No comments:

Destinations are overrated, live for the Journey. I have been addicted to "Destinations" for my entire life. The idea that things will be better once I get there has always overshadowed the getting there part. I am not putting "Destinations" down but feel putting them into better perspective is important.

Unraveling the mystery of a "Good Destination" may be exilerating but it is also a fast and fleeting event. It is the journey that should be savoured and like a hard carmel candy left to sit on your tongue to dissolve it's creamy buttery sweetness into your mouth.

“Life is a journey, not a destination.” ― Ralph Waldo Emerson
Posted by Eliza Ralph-Murphy at 6:19 AM No comments:

If I were training for Leadville

Posted by Eliza Ralph-Murphy at 6:30 AM No comments: