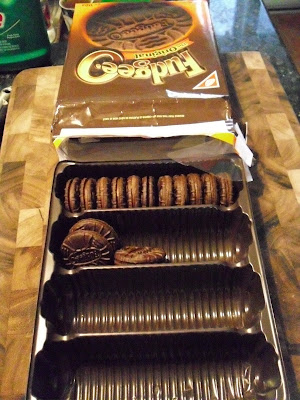 Mmmmm, I love cookies and I can't stop eating them lately. I told myself that I had eaten my last one. Well maybe one more then no more after that one and definitely no cookies tomorrow. That is what I said last night. Then I woke up this morning, poured my morning coffee and decided one more cookie couldn't hurt but it was the last one and then after eating 3 more I said enough is enough. Then it was time for my long run. I wondered how much energy my cookies would provide me. They are 65 calories each so that was a good 260 calories or pure sugar carbs. The run was only a little 75 min. today and I figured I could start eating healthy again starting at lunch time. Well I made it through the run, 65 minutes of it and after having my protein shake(which I never miss after a run and has 130 calories) I poured myself another coffee and well those cookies looked so good and hey just one or two or 3 turned into 4 then 5 then 6. It was afterall coming onto lunch time so lets see 6x65=390 calories. Not so so bad for lunch. I do afterall need 2500 calories to maintain my 140lbs. although I am weighing in 5lbs heavier then that these days. Soon it was time for my strength workout and again I wondered how my cookies would do energizing me through my squats and pushups and what not. I was feeling a bit dizzy after one set so I made a protein shake quickly, had a few sips and got back to it. As I was pushing out my second set of decline pushups I started to feel my cookies in my tummy coming up and thought how I really never wanted to eat another one. But then again I say that all the time and thought that perhaps I should just force myself to continue to eat nothing but cookies all day(plus my shakes) and perhaps that will cure me of my cookie habit. Thing is I don't think I can do it. I am feeling sick just thinking about it. To pull this off I will need to eat another 1500 calories of  cookies and shakes. I have 14 cookies (about 800 calories) left and I could have 2 more shakes using milk this time to increase the calories and perhaps add in a banana to round out the day. OMG I am feeling so sick at the thought of eating another cookie. This cookie diet just might work afterall.
Posted by Eliza Ralph-Murphy at 2:52 PM 3 comments:

A gif of me during the Dion Frontenac Snowshoe race in January.
Good Luck to Sara tomorrow at the the Batawa Frozen Ass Snowshoe race.

No workout is a complete waste of time. We learn something from each one of them be it run perfectly, too hard or not hard enough. I myself have a knack of mixing the latter two and this is usually how my races play out also. So while I was cooling down after my most recent workout where I not surprisingly went out too fast, conked in the middle and then redeemed myself briefly at the end, I began to wonder: Do we as runners perform a certain way because of our underlying personalities? Do I need to become another person in order to change the way I perform athletically? As I pondered those thoughts I uneasily came to the realization that I probably do need to change as much emotionally as I do physically to improve as a runner. There just seems to be so much to learn about ourselves every time we tie up our laces and dare to push ourselves into new unconquered territory. This new territory is uncomfortable and many times when I find myself there I just want to leave.

I am sure the reason I go out too fast is because deep down inside I am not satisfied with my current level of fitness, don't think it is something to be proud of and feel a need to be better then I currently am. To put it bluntly, I have a hard time accepting myself as I now am . The result of that mind set is: I go out fast, can't live up to the pace, have to take a break to regain my composure; then, I finish the workout/race unsatisfied. Going out slow may be an indicator that the runner has running confidence. Their restraint in turn says that they are happy with who and where they are today here in the middle of a race. That sort of thinking I am sure probably carries over into their everyday lives as well. Being happy with where you are means you are satisfied with yourself as a person and confident that you are good enough just the way you are today. That doesn't mean that you don't want to get better. In fact being confident seems like a nice stable platform from which one can build upon as in: I am good enough today, now let us see what I can become tomorrow. Which is so much better then: I am not good enough today and if I don't get better I will not be good enough tomorrow.

I am beginning to think that this is the lesson I am needing to learn so that I can build my life upon a stable foundation of confidence rather then continue to wobble atop the unstable rubble of self doubt. But how? How do I build that stable platform? Where does confidence come from? Can running help me find it or will running just be an indicator that I now possess this thing called "confidence"?


Wouldn't it be nice and I wish it were so-
That, if I was to start my race out running slow
And if I held it steady to keep good time;
Than, I'd win my confidence at the finish line!

BTW, I am running in the Twosome 5 km on the 13th on a team with Steve Maybury. Age group is determined by the sum of our ages so we are in the 110+ group. I think we can do well in this category. I am confident of it; )


Again this year I will be concentrating on running 5 kms with Emile's Run in June being my GOAL race. I have already raced a few times only a month into the year. Below are my race reports and pics. 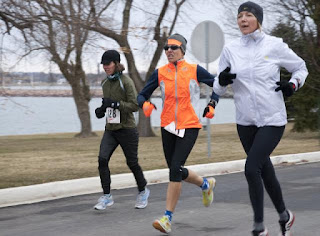 The stats- 4:27, 4:33, 5:10, 4:36, 4:45, 5:08, 4:40, 4:44. Official time 38:19, I think. First in age. The first part of the race I really had to use any positive talk I could muster to keep going. I had passed Stacey(orange coat in picture) at 1 km so I was a bit concerned about having to race her the whole way which probably triggered a bit of anxiety. Shirley passed me on the "HILL" at 2.5 km and I caught up to her at about half way but after the turn around at 4.5 km the gap opened and she finished in 37:48, I think; ) The wind was relentless and coming back it felt like I was standing still at times when I'd get hit with a big gust of it. I felt better emotionally wise coming back and just worked hard to the finish.

Note: I didn't know it at the time however in the picture above, which was taken at the start, the girl in the green coat who is in my age group was only 4 seconds behind me at the finish. 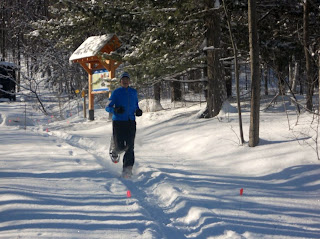 Dion Frontenac Snowshoe Race
Really, a beautiful day for the race. I wore a light shell over a long and short sleeve top, tights and wind pants. Figuring out what to wear was big on everyone's mind before heading out for a warm-up as no one wanted to be too cold or too hot. It all was so low key that it didn't really sink in that I was about to race until we started. I may have been trying to block it from my mind. The amount of snow may have been the most I had ever run in. I started out on the main track but quickly realized that I was boxed in so I made an early break for it outside to the left and passed a bunch of people and then settled in behind a young fast looking girl. About 1 km going up hill I realized I needed to work a bit harder so passed her. I could just barely see the back of Shauna and another runner for a few minutes and then they were gone and I ran alone for the remainder of the race. The trail was really well marked and the footing was really good considering the amount of snow that fell yesterday. I had decided to run all the hills this year and only walked a few steps at approx. 3.5 km as I was slowly picking away at the longest hill on the course. I was tired but not like in a road race. I could still be much more efficient on my snowshoes so keeping up the concentration form wise was very important if I didn't want to slip. I did attack a few hills but kind of bounced down the really steep ones not really sure of the best way to take them. Since there was no one behind me I was chasing Shauna's imaginary back just to keep me pushing forward. Wow it felt long. I thought maybe the RD was playing a joke on me and just sending us in circles around the park. It was nice when I got close to the end and could see the finish marker through the trees. I think my time was pretty close to last year's which was 47:30 'ish.


I cooled down for 10 minutes waiting for Maryanne then got cold standing around at the finish. It was nice to see Karen and Evelyn and of course Derrick and Sara. I saw Sara for all of perhaps 10 secs. as she rushed out on to the course and snapped pics of me approaching her station. I also had a nice talk with Kendra in the ladies room. I am stiffening up quite nicely. The bottom of my left foot feels a bit stretched out and my knee needs icing...such is the life of this runner.
Posted by Eliza Ralph-Murphy at 7:02 PM No comments: