Getting Lost at The Barkley Fall Classic 2015 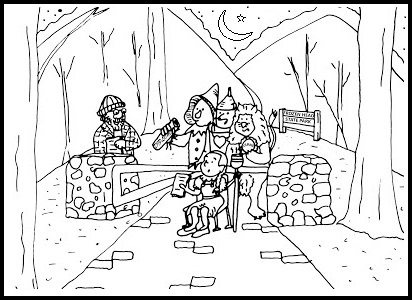 But I didn’t get lost, I just followed some young bucks in the wrong direction for the heck of it. Pretty quickly I was sure we needed to head back to the correct trail but then they got ahead of me running very fast down the west side of Bird Mountain and I began to get worried they’d get lost. I figured I’d catch them, turn them around and try to make up time after that. But I didn’t catch them until they had stopped at the bottom of the mountain unsure of how to proceed. After professing that we needed to retrace our steps all the way back up they actually somehow convinced me that I was wrong. By then I really wanted them to be right(which they swore they were) because climbing that mountain again was too much to bear. I lead them for a few minutes and told them I was breaking cobwebs so we were definitely going the wrong way. They then concurred that they had been breaking them all of the way down too. OMG!! I immediately took them by the ears (wet as they were) and turned them around, showing them where we went wrong on the map and feeling pretty darn smug about my amazing map reading skills and how I had saved the youngins’ from a night in the woods and Laz a sleepless night of searching. And with that, they were gone like two (insert witty simile here) and I was left alone with only my righteous smugness and withering pride for company at the bottom of Bird Mountain.


PS apparently the bucks made the first cutoff. I got there an hour too late so I was courteously shown the exit.

PSS thank you to those who made my day so wonderful.
Posted by Eliza Ralph-Murphy at 8:52 PM