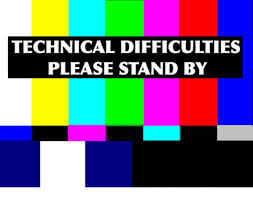 Remember when you use to get your TV signal from an antenna on top of your house. If the picture was a bit off all you had to do was fine tune it and the squiggly faces were miraculously revealed. However if the picture was entirely snowy the fine tuning couldn’t do much to help and a total repositioning of the antenna was called for. So that is where I find myself. I have fine-tuned the hell out of my antenna and still my reception doesn’t amount to much more than a ghostly image behind flickering snow. Certainly it is nowhere near the HD "Elite" quality I have been striving for.


There are many reasons why one’s antenna might not be picking up a good and proper signal. It could be that it was set up incorrectly, or a strong force blew it off course. Perhaps the signal changed position or ceased to be broadcast altogether. In my case I believe that my antenna was set up incorrectly to begin with. No matter how much I fine-tuned it I would never be able to find a good signal because my alignment was off beyond the limits of my fine tuning. In this instance my fine tuning refers to my attempts at conditioning. I could have the best coach in the world(and I did) but no amount of conditioning(fine tuning) could ever bring a clear signal because of the physical limits that conditioning can achieve. Every coach knows this fact. A seasoned coach can pick out of a crowd of runners those that have their antennas in position to hit a crystal clear picture and those that are destined to watch a fuzzy screen no matter how much they fine tune.


If a coach doesn’t know immediately what a runner’s potential is then a season of dedicated training would surely reveal it i.e. local, regional, national, world class etc. Take me for instance. At the age of 46 my coach told me that I might be capable of a 36 min 8km. This was his best hope for me and at the time I was thrilled because I had only just run under 40 minutes. However, 5 years later and with a 36:56 8km PR I realise that not only was he pretty spot on but that his assessment ranked me a mere regional class runner. On an age graded scale a 36 min 8k ranked me at 72% at 46 years of age. So out of a 100% signal quality the best I could ever hope to receive is 72% clarity.


I have followed many local runners whose history of training I am familiar with and compiled data from races dating back 10 years from SportStats.ca  I converted their results to age graded percentage of world record time on a graph and each runner’s own personal pattern/ranking/signal quality emerges. EM(me) as a new runner had a spike between the first and second year of running, than a gradual rise followed by a leveling off and a decline. Most of the runners on the graph had been running for many years prior to the results I could find so they had no spike in their results. Note AT and AN had a spikes in their later years when they began training with a high level coach who fine-tuned them to their maximum 10% limits. Each runner's ultimate signal quality was revealed as, none as 60% local class, EM, AT and MB as 70% regional class, AN and SM as 80% national class, and none as 90% world class. 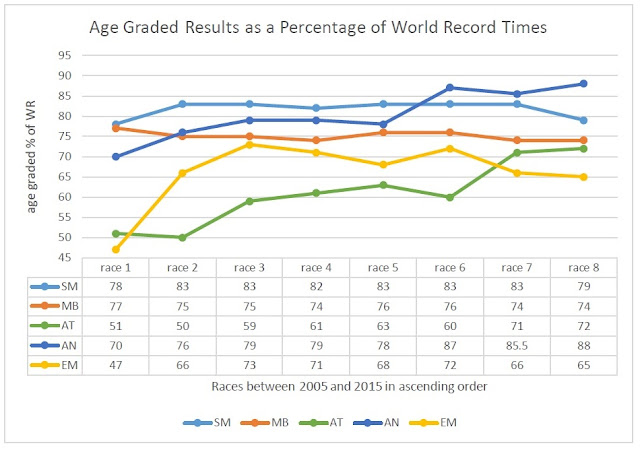 So what does all of this mean??? It means it’s time for me to climb the antenna myself and begin some serious repositioning!!

Posted by Eliza Ralph-Murphy at 10:37 AM