OK I had a nice report all written up and I accidently deleted it. I had inadvertently typed it into the caption portion of one of my pictures and when I deleted the picture everything below it was also deleted. Note: I have since had time to add a few important facts and some past due thank-yous to the summary in bold.

So to summarize what I had written-

I went out "TOO FAST", well actually, "NOT SLOW ENOUGH". I learned there is a difference. Even though I had topped out with a 4 hour long run a few weeks before the race, I had been keeping my heart rate below 140bpm in training and in turn that meant usually walking the longer hills. I figured that because this was a flat course it would be faster and therefore I should be faster and hoped I would be able to get away with a bit higher heartbeat of 145ish for the duration. Wrong!! I think the one thing I failed to realize was that I had been walking during training so I had never really run more then 2hrs. non-stop and with the addition of the faster pace, higher hr and 100% pavement it was all too much for my left quad. I know it was my A-goal of reaching the 50km mark that drove me to blindly go where I had never been before but I found that I just couldn't let go of the idea of hitting that mark until it was too late.

My left quad started to pull on my knee cap after 2 hours and try as I might I eventually had to walk the remaining time. I could walk without pain but could not run but a few steps which was the most frustrating part as the rest of me wanted to run but we were being held back my one little party pooper:-(

I ran approx. the same distance in the first 2:15 hours that I walked in the last 3:45. I was at 19km at 2:15 hrs. and walked just over 18 km after that. I wasn't exactly power walking either, more like I was out for a nice brisk stroll. In the end I was not only the slowest runner but the walkers were passing me too. That is when I really began to appreciate just what great athletes all of these people were.

I learned that ultra runners are the most seasoned runners that I have ever come across anywhere. Most have run more ultras then I've run 5kms and some have run 10xs more and for some that is just this year. I bow to the endless hours and countless miles in their collective rock solid muscled legs:-)

I have recovered very well. I haven't run yet but the left quad was the only sore spot and then only going down stairs the next few days after. I'm going for my first run since the race tonight,(Monday 17th) wish me luck!

I would like to add that this event was organized and run to perfection by Hladini Wilson. All of the lap counting volunteers were very encouraging and one particular French gentleman spent the entire day trying to learn to pronounce my name with his thick accent. I had my own food and water so didn't sample the buffet but there was always something on the table for everyone(including my daughter to my dismay) throughout the day. I highly recommend putting this event on your race card if you ever want to try this type of event in the future. The views of the lake were breathtaking and ever changing with the sail boaters and kayakers out enjoying the day as the racers winded their way around the point of the Royal Military College grounds and weaved in and out of the historic walls of Fort Frederick.

I also want to thank my crew of my daughter Rhiannon and my Mom Jane for being there for me for the 6 hours and managing my water, food and clothes. It turned out to be a cool, dampish windy day for the spectators although for the runners it was pretty perfect weather as long as you were able to keep moving. I unfortunately was not, so I had to don my wind pants and another shirt to keep me warm in the latter stages of the race. Funny story but when I finally decided to get some warm clothes on I headed for my crew and there was my Mom, warm(and asleep) in the car, but who could blame her:-) Another cute story about my daughter has her seeing me slow down and beginning to walk when my knee started barking. Well this was embarrassing her and she called to me, "don't walk Mom, RUN". So I started running again and this happened a few times. Then as the day progressed and I had been walking for a few hours every now and again I would get up the gumption to try and run again and I'd hear a voice call to me, "don't run Mom, WALK":-)

Also thanks to my coach Derrick Spafford for preparing me for this race If I had only listened to his warning to keep my hr around 135 I am sure I would have run much longer. I was also surprised to see him and his wife Sara around the 4 hour mark of the race. I had already been walking for what seemed like weeks now(2hours) and I knew I had some "explaining to do". Thanks to Sara also for taking a few pictures to commemorate the event. When I saw her taking my picture it kinda felt like I was at some kind of Ultra graduation and they were my proud parents taking my picture...which believe me was weird:-P But really they have both been there from the beginning of my running career and I know they understand better then anyone what that race was about for me and that it is the first of what will hopefully be many more ultra events to come. 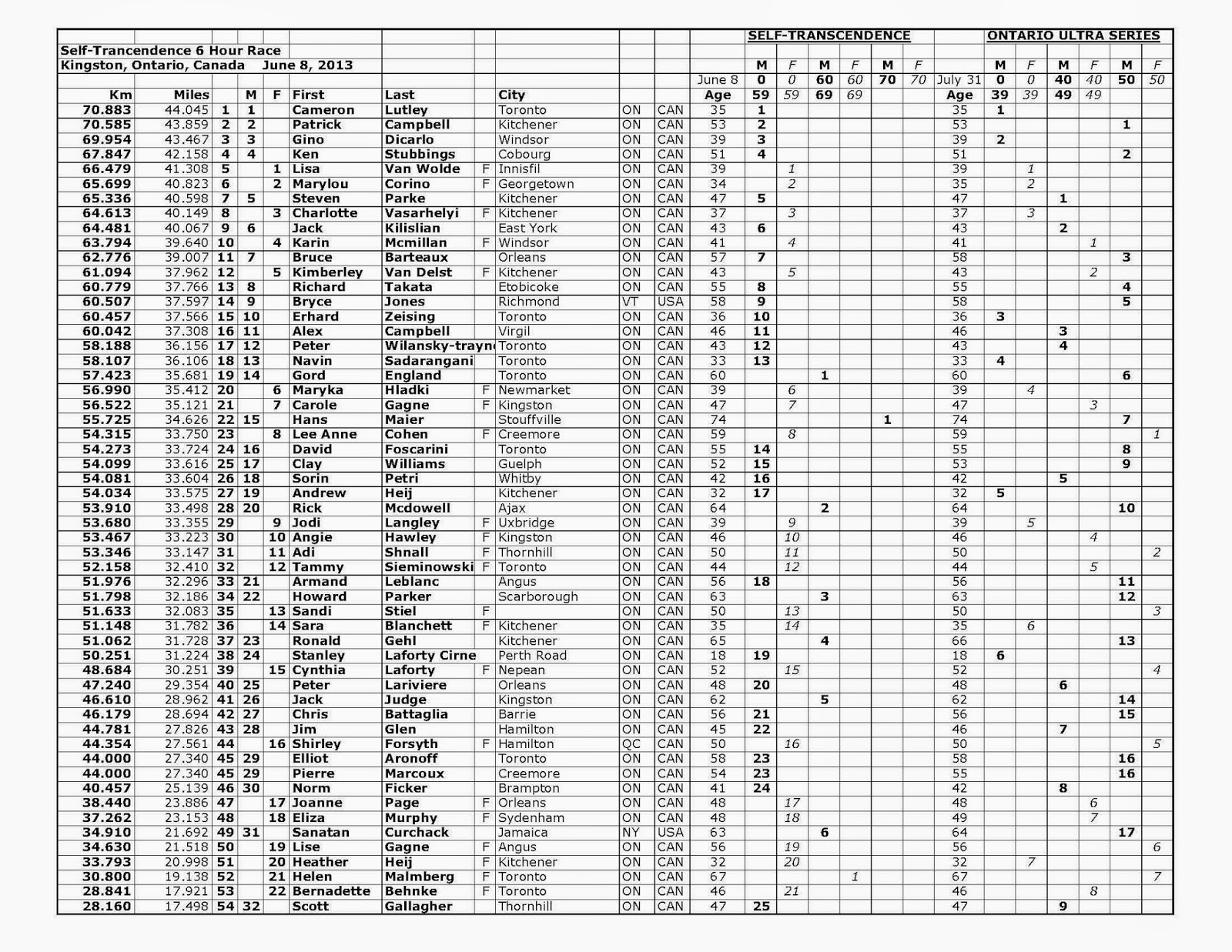 Posted by Eliza Ralph-Murphy at 9:12 AM

It was nice seeing you there, EJ! I`m sorry it didn`t go as planned, but I admire you for sticking it out and doing what you could considering the quad.

when it comes down to it I am really just an idiot. I was so strict during my training not to go over 140bpm like it was my religion and I'd be struck down my God if I did. But I got to the race and my brain turned to mush and my first lap I was at 143 and it rose from there. Look in the dictionary and I swear I am the definition of the word:-) Oh well, I will give it another go sometime soon and we'll see if I learned from my mistake. I really appreciated seeing you there and if you hadn't been there before I'm glad you got to experience it and maybe think about running the race yourself one year.

piss on the heart rate - you did it! outstanding! welcome to the dark side ...

I don't know, I think technically I am still in light as I haven't crossed that 26.2 mile line and beyond yet.