I'm going on an adventure - Part 2

After the initial shock, both mentally and physically, of hiking for 8 hours on my first day I decided to take a full day off. Honestly, that evening I was almost ready to put the whole thing off  'til the next weekend. I know most of you reading this(thru hikers and ultrarunners that you are) might find it bizarre that 8 hours of hiking was a such a shock to my system. Believe me I was a bit bewildered myself as to why I found it so difficult. Firstly, I think my mind had certain expectations as to how long I would be "out there" and when those assumptions turned out to be wrong a part of me became uncertain and mildly panicked for lack of a better word. Secondly, I also expected that my body would be happier. All felt good for the first 4 hours but then small aches and pains set in as my foot got sorer(possibly caused from slipping on the soft snow), my calf got tighter and the chain of pain made it's way up to my knee, hamstrings, hip and inner thigh. I spent the last 4 hours stretching various parts of my body hoping to work the kinks out and trying to make up for lost time. It didn't help that I was wrong about the distance as I thought I was hiking 30 km when it turned out to be more like 32 km so I was always behind and chasing that extra distance.

So the day off was what I needed to do to make sure my body and soul were recovered before I continued on. Luckily we have a new physiotherapy clinic in Sydenham and I was able to get my foot adjusted and prescribed some stretches to keep it and the rest of the "chain of pain" content for the second and last stage of my journey. I have been having trouble for the past 2 years with my left cuboid bone locking. My cuboid is actually pulled out of alignment by my tight calf and hamstring muscles so keeping them stretched before, during and after exercise is the best way to keep the cuboid in alignment. I wasn't hiking so I could end up injured so getting it taken care of before it got worse was my first order of business. By the evening of my day off I began to feel really good mentally about the first day and with a better perspective about everything I was even more excited then I was the first day to get hiking again.

Day 2, Sydenham to Hwy. 15 in Elgin, 38 km, 9 hours, 288 pictures
With a full days rest and a happy foot I began day 2 of my journey to hike the length of the Cataraqui Trail. Today I was beginning where I ended on Day 1, right across the street from my house, at kilometre 72 of the trail. It was 7 am and the sun was still low in the sky, I pulled out my enormous camera to take the first picture of the day and...what??? No battery! I had left the battery charging overnight so luckily it was right across the street and I was able to quickly run back home and retrieve it, emergency averted. I still hadn't found my phone that I lost on the first day of the hike so I had to put a few dollars on an old phone so I could keep in touch with my Mom so she knew when and possibly where(incase I didn't make it to Hwy. 15) to meet me at the end of the day. Now that I had a better handle on how long it would take me to hike the 38 km I was pretty sure that I would be approx. 9 hours on the trail and I felt a bit more prepared mentally to deal with being "out there"even longer this time. OK, doing the math I was probably still underestimating the time however I really thought that 9 hours would be my max as long as I didn't lollygag so much. I decided to save time by not taking too many pictures and I also tried to carry enough food and water on my person to last an hour so I wasn't having to stop and find things way back behind me(all of 4ft) on the sled. Now all I needed was for my body to cooperate and get me to where I was headed.

I knew the first part of this leg of my hike very well. The trail follows along the shoreline of Sydenham lake for approx. 5km. The lake was already alive with snowmobilers heading to and from the ice huts that made up a mini hut city on the bay which is connected to the larger lake. It was a perfect day to be on the ice and trail. The skies were clear blue and the temperature was colder then the first day at around -12 C so the snow would hopefully remain firm and good for walking and sliding my sled on. Oh yes my sled, it is something I had laying around and used to take my daughter tobogganing on years ago. I really was not enjoying wearing a large pack on my back during my long hikes in the woods preparing for this hike. I guess I just didn't have time to get use to wearing one and mine wasn't really the kind of pack built for hiking.

﻿
I had considered buying one however when I first dreamed up this idea of hiking the trail I saw myself pulling a sled so I guess I really never gave "backpacking" a chance. On my first day I had piled everything plus the kitchen sink on to "Sleddy" at the last minute including a small tent and a few too many litres of water. Today I brought only what I would most likely need packed into one duffle bag(my red Sydenham 8km bag). Inside that was an extra pair of socks, mitts, underclothes, a warmer overcoat snowpants and belaclava plus 2 litres of hotwater, 1 litre hot sport drink(accelerade), 3 granola bars, a thermos of chicken noodle soup, a thermos of coffee, 2 soyabutter(peanut allergy in the family) and jam sandwiches and trail mix along with a pair of sunglasses, sunscreen and hot packs for hands and feet. I kept all of my drinks inside another soft thermal bag to help keep my water from freezing. Oh and let's not forget my Dion snowshoes which I never wore but felt compelled to bring along since they like to get out and be around snow even if they aren't running on it themselves.
﻿
﻿
The stretch of trail from my house to the bay with the ice huts and a few kms beyond is anything but remote. There are houses and cottages lining the trail pretty much the length of the lake. A couple of differences between this section of  trail and the section I walked previously is that there are no farms here and the homes front onto the trail which passes between them and the lake. After this "residential/cottage" section the trail becomes much more removed from civilization. If I should have been worried about any section of the trail then the section I was now approaching was probably it.
﻿
﻿
﻿
﻿﻿﻿﻿There were very few homes on the trail for the next 30 km and for the most part I had now entered into beaver country. From this point on any low lying flat areas I came to had been damned and cleared by a beaver. There was still plenty of trees in the more rolling areas and I passed over or beside a number of lakes. This section of trail also had the most beautiful rock formations as it is part of the Canadian Sheild known as the Frontenac Axis. It really was a perfect day to be on the trail and I was never bored as I tried to soak in the ever changing landscapes that were unfolding before my eyes with every step. I was so glad to be able to see it in the light of day and not at night as it would have been if I had decided to tackle the entire trail all at once. 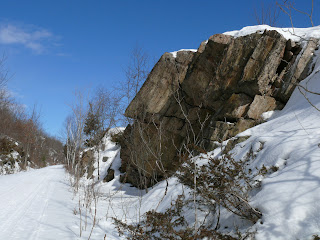 I chose to modify my original plans mostly for safety concerns including being on the trail at night with the snowmobilers, a fear of the animals(aliens, axe murderers and evil clowns) I might encounter and not to mention the cold. I would be hiking alone without any support, possibly any phone reception and without any prior experience plus with it being my first time covering such a long distance I ultimately made the decision to turn the hike into a 3 day event. Thinking about those fears now with 20/20 hindsight I can honestly say that many of my them were valid ones. I cannot tell you how many times I was unaware that I had a pack of snowmobilers behind me and didn't hear a thing. The noise from the sled dragging drowned out almost all other sounds and seemingly from nowhere I would hear the rev of an anxious snowmobiler waiting for me to move over and give him room to pass. I can only imagine how dangerous it would have been at night. As for the animals I did see a blood soaked spot where some small animal had been killed and carried away with it's blood dripping along the trail. It was fresh on the snow and not run over by snowmobile tracks yet so it had happened not too long before I had arrived. No, I probably would not have been approached by a wild animal but alone in the dark I know it would have been quite a terrifying night and I'd probably prefer to not be alone if I was to attempt a night hike in the future. I finished the days hike feeling so much better then I had on the first day. I ran the last 10km easily and feeling strong. I actually beat my Mom to our meeting spot by a few minutes and I had a chance to look across the road at tomorrow's starting point to ponder what my next day of hiking might hold for me.
To be continued... 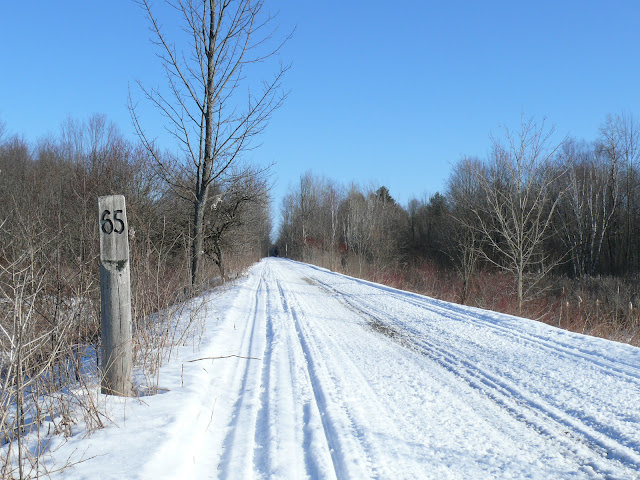 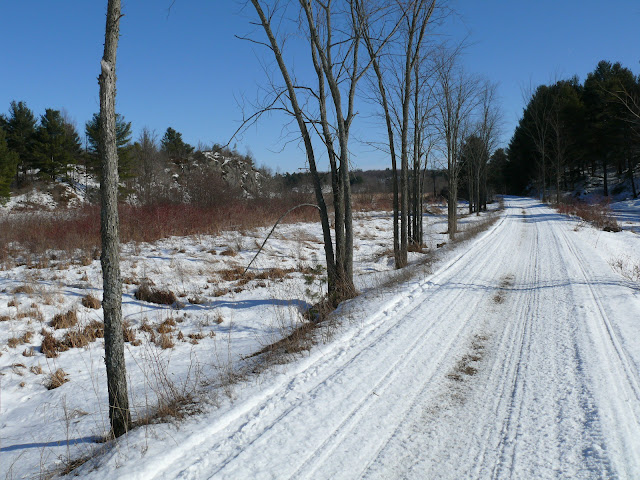 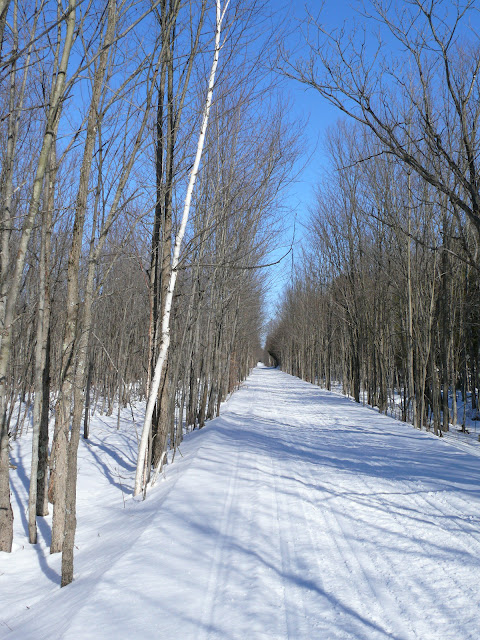 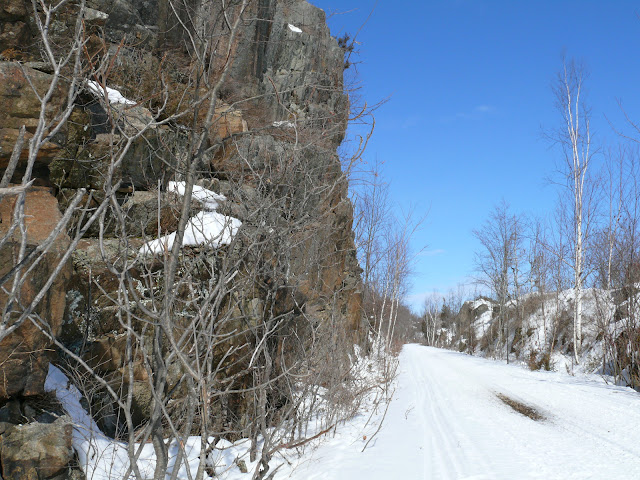 Posted by Eliza Ralph-Murphy at 11:39 AM

Dion twins, that is very clever. :)

Great leg EJ! Love it! Very interesting perspective on your hike, and love the photos!!

That section between Perth Rd and Chaffey's is just amazing!

Looking forward to seeing the final leg of the trail...that I haven't seen most of yet.