The Case of the Missing Sock 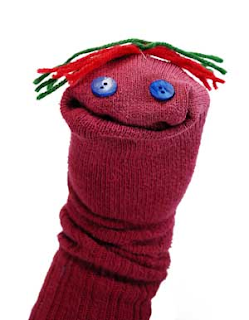 Ok I went for a quick recovery run today. I headed out the door wearing my Kinveras, a pair of warm socks(ski socks actually), a pair of tights, a shirt, and a light coat. After 35 minutes and 30 minutes of running I arrived home with everything I left with except for one thing. I was missing one sock. Why did I leave with two socks and arrive home with one? Here are a few more clues. I saw 5 people and one dog on the trail. First off I saw two girls walking and one carried a bag with a heavy object in it. I then saw a women walking furiously down the trail who kinda looked at me sideways as I passed her and lastly I saw an older couple and their off leash dog who greeted me then ran off to greet the lady walking so furiously behind me. I reached my turn around point at 20 minutes and then ran home. It had been 35 minutes since I had left home and I arrived there missing one sock. Why, where, how and by who did my sock get removed from my foot? Have a guess and then I will tell you tomorrow;-)
OK I can see that my mystery as maxed out the deductions skills of the small part of your brains that isn't consumed by running and other things like dressing yourself and feeding you and your family. So here is the solution to, "The Case of the Missing Sock".
I had just started down the trail which is all of 200m from my house and I could see two girls about another 200m ahead of me. From where I was I realized something was amiss, but what? Was that a dog they were dragging behind them, was one of them limping? As I got closer I noted that one of the girls was wearing a Frontenac Fury Hockey jacket, the same my daughter wears so it must be one of her teammates I thought.  But what was that draging behind her and why was she limping. "Oh no, is she wearing a cast with a bag on it because the trail is wet and muddy?" "Hey, I recognize that cat hat", I said to myself. "Actually I gave it to her for her birthday last year".  The girl with the bag on her foot was none other then Brandy T. You will all remember her from the, "Liquid Snowshoing video". So there stands Brandy with her foot in a bag(no cast thank goodness) and carrying another bag with something heavy in it. Of course I stopped to ask her what was up. "I stepped in the mud really deep and it went in my boot so I went in the store and they gave me 2 bags", she explained. "So you put your boot in one bag and your wet foot in the other," I asked. "Yep, but I am still cold, my foot is really cold and we have to walk all the way to Paige's house." My mind began to swirl as I pictured poor Brandy asking for help at the store, being given two plastic bags from someone, then emerging from the store and trying to figure out what to do with them. Her solution was to put her muddy boot in one bag and to tie the other bag over her wet socked foot and then continue on her way. Poor thing she had it so wrong so I had to set her straight. I told her, "take both your boot and your foot out of the bags. Now take your wet sock off and put it in one of the bags to take home. Now put the other bag on your foot and put it in the boot". "But my foot is so cold", she said. "Ok I will give you my sock, I just took them out of the laundry and have only had them on a few minutes so take mine because I am not going very far". So she put my sock on and put her foot in the bag then in the boot and continued on her way. I know her Mom will return the sock to me so I had no problem leaving my expensive skiing sock on the trail on Brandy's foot. I continued on my run passing the lady walking furiously who noticed that I was only wearing one sock, and then I passed the couple with the dog off leash who gave me a good sniff(could he have noticed my missing sock also?) and I then arrived 5mins. late to my turnaround point and later arrived home without my sock 35 minutes after I had left. Mystery solved;-) I hope you enjoyed "The Case of the Missing Sock".
Posted by Eliza Ralph-Murphy at 7:44 AM

Ok Derrick emailed this-
"Sorry about the sock..... Bio break?"
Do you really think I would pee on my own sock and then write a blog about it? Who would think that anyways, what are you some kinda trail peeing ultrarunner or something. So once again the answer is not that I peed on it. And even if I did I still would have brought it home. They are expensive socks and I would not leave it just lying in the woods because of a bit of "bio" matter.
Anyone else want to hazard a guess?

I hope you are refering to my dogs;-) Hey but I never thought of that, in an emergency but once again I would probably bring it home. And why do people use the little bag then leave the bag? I always hope they are coming back for it.

And BTW Derrick I think I just got the true jist of your answer and I didn't know that Charmin' was making socks these days. How do they compare to WigWams?

Well you could have asked for it to be returned to you. Mmmmm what happened in that missing 5 minutes?

Not nearly enough clues. You need to work on your Carolyn Keene impersonation skills :)

I think Sherlock could have solved it with the clues I gave. So you need to brush up on your Sherlocking skills Mr. Bohn;-p