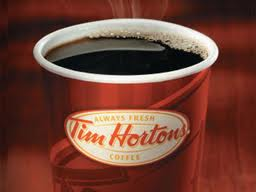 I was working on a poem in Tim Horton's today...isn't that what people do in Tim's?? No, you are correct I should have been in a Starbucks but really I don't "GET" Starbucks. I don't know how to order and I really don't want to learn. It is coffee people not rocket science. They get out all of the blenders and shakers and foamers and flavors and syrups for everyone else's order and then I ask them to put a a drop of cream and teaspoon of sugar in mine and they look at me like I have a contagious disease and point me towards the little table across the room. It is like being sent to the child's table at Thanksgiving or Christmas and I refuse to stand for it so that is why I was writing my poem in Tim's.

Anyhoo(as some of you like to say) back to my story..err..my poem. So I was writing this poem in Tim's, it all started with a comic I had just doodled of URGal running down the streets of China through a maze of mooing cows and as wild monkeys try to snatch the hat off of her head she mutters to the wild dog running next to her, "Toto, I have a feeling we're not in Kansas anymore", which then morphed into a sketch of a victorious URG coming to the finish of the JFK 50 which morphed into "the poem" which is still incomplete-ish and will probably remain so because it morphed into a quote I thought of about "Victory" which then morphed into my writing a 12 page Morality Tale about people putting off their dreams until it is too late which I will try to finish one day even though I already feel that it is probably not nearly as good as I thought it was when I began it. But the morning had passed quickly today and it was now time to go to the appointment which had brought me into town in the first place for which I was killing time before in Tim's.

So I packed up my notebook of doodles and poems and sketches and quotes and morality tales and as I walked out the door I immediately became aware of a homeless lady. She was muttering to herself as she pushed a shopping cart stuffed full of  her worldly possessions down the sidewalk and I wondered about her state of mind. I thought that perhaps like Dorothy and URGal she was confused by a changing world that had become foreign to her and then found herself unable to cope. Perhaps like me she was asking the world for some cream and sugar and all the world had to give was foam and syrup and so sent her across the room to the little table. I wondered if she ever drew pictures and wrote poems and morality tales. I wondered if she and I were more alike then different? I wondered if I could find myself pushing my cart down the street one day? I am pretty sure that the world doesn't make much sense to her and if the truth be told it doesn't make much sense to me either.

I guess I then decided I wanted to share the quotes with you all  so hence the title and here are two more.

"There are some defeats more triumphant than victories."- Michael Eyquen de Montaigne

Sometimes it's GOOD
Sometimes it's BAD
"SOMETIMES" is BETTER
then never HAD.
(please feel free to fix this ending or add a verse or 2)

Morality Tale to be published soon on Amazon.ca
Posted by Eliza Ralph-Murphy at 7:09 PM

Have to admit that I resisted Starbucks for a number of reasons initially including I refuse (still) to speak Starbuckeese (one Grande please?).

However, I have come to look beyond that as I like their coffee so much better than any other chain coffee shop. Also the fact they have free wifi is alway important for me too.

Though if close to Coffee & Co, Coffeeco or Hillside, they would be my first choices.

I'm not so picky about my coffee, I just want some cream and sugar in it that is all.

I don't even have to ask at Hillside anymore, they all know what I take.

Okay first, great post, great poem, I'll be sure to pass this on to Kim. 2nd you just have to ask for a Large coffee at Statbucks, you don't have to use their lingo, and then the cool thing, you get to add your own Milk/Cream/Sugar, none of this Double-Double, Single-Triple, etc crap. And at *$ the coffee tastes like coffee :)

David,
Firstly, you are too kind because I was thinking that posts like this one are a indication that I need to get back to running some decent miles again soon before I go completely bonkers.

Secondly, it is such an honour to have "Ultrarunning Royalty"(3rd in age at JFK 50) commenting on my blog;-) Huge CONGRATS!!

Or simplify and learn to love it black. Takes a few weeks, but worth it.

JD, I agree re great minds, but I like how yours is more personal to you, nice.