Note: There has been a week delay in posting this. I think I decided not to post it originally because I am becoming tired with myself for saying what I am going to do when I should be doing what I say I am going to do. If that makes sense. Whether I will carry through with my plans as stated below is yet to be seen but I think I was able to take some baby steps towards my goal during my race and the first step is always the hardest so here goes. 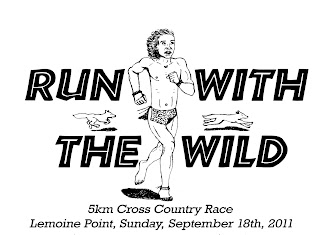 Have you ever stopped to consider what powers you through a race? What fuel source do you call on to keep you motivated and moving? I asked myself that question yesterday at 1km of a 5.3km cross country race. I had hit that point where energy and exhilaration had been replaced with tiredness and hurt and was wondering why I do this to myself again and again. That thought usually triggers a response of thinking about quitting which then leads to my becoming desperate to NOT FAIL. I call on my desperation to keep me moving even when I want to stop and though desperation is a powerful fuel I have discovered lately that it is not the best fuel source for me. While in that state I am trying TO NOT DO certain things such as fail, lose etc. rather then trying TO DO certain things such as SUCCEED, WIN etc. I am not an expert but I do think it makes sense that negative motivation is not as good or powerful as positive motivation as a fuel source.

So there I was at 1km beginning to feel desperate and not wanting to go down the, "I want to quit road" again I began to analyze(so much for running dumb like a horse) what I was truly feeling and what I realized was that I really didn't want to quit, what I wanted was to stop being desperate about not beating certain people, not running X time and all I really wanted to do was run hard and feel good doing it(run dumb like horse?). So I did it, I let go of the desperation that usually fuels my races and switched to FEEL GOOD ENERGY mode. The old feeling of desperation did try to poke itself into my head every now and again and made me question whether I was using my new found philosophy as a reason to not try my best, however I kept coming back to the fact that I really don't want to run "desperate" anymore. I just plain need more motivation then being worried about NOT reaching my goals to fuel my races these days.

As I sit here now I am not sure what is going to fuel me in my future races but I do know that running strong and proud is better for me then running scared and desperate and if that costs me 100 metres at the end of a 5km race then so be it. I do think that I will run better and for longer if  I enjoy my races more and although switching fuel sources may hurt me in the short run I am confident that in the long run it is the best thing I can do for myself. Switching from desperation to an alternate fuel source is going to be hard for me. Yesterday I tried running on "FEEL GOOD ENERGY" and it did well for me but I do think there are more powerful fuels sources I have yet to tap into and finding the right blend for me will take some time. What I do know now is that not all fuel sources are created equal and though they all have positive and negative aspects to them it is the ones that power me through a race but then eat away at my insides afterwards that I need to avoid at all cost.
Posted by Eliza Ralph-Murphy at 10:04 AM

Interesting to read your thoughts on this. I can totally relate. That Not Fail stuff is good fuel indeed, but I agree that the Feel Good stuff is healthier. I now think of races as 'just a game', and so a bit of competitive No Fail can crop up as fuel along the way, but it stays on the playing field and is kept in it's proper perspective. I'm typically annoyed by gender stereotypes, but in my observation, I think IN GENERAL ONLY men have had more practice and socialization at this and are therefore better at it. Maybe that's changing, I hope so.

Sara,
I guess I don't know if I need to "lighten up" or "toughen up". Putting a race into the context of being "a game" may help on both fronts. (just a fun game I thought of- I get 1 point for every person I pass after 1km and lose 1 point for everyone that passes me;-)