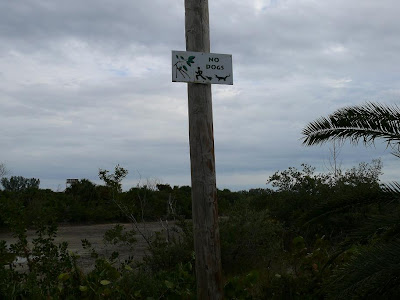 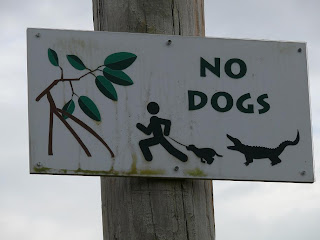 I have meant to put these photos from a trip to Florida up for a while. I just think the sign is hilarious.

I am pretty sure that the dog has more chance of outrunning that alligator then the guy does.

The trail this sign was posted on looped around a swampy area and despite the sign I actually went for a jog there as it is the only dirt trail around and I was getting tired of running on the paved roads. It was the dry season so most of the alligators were not that far inland...I hoped.

Post Sandbanks 5km race I felt really good with no knee or calf problems for my effort. Just to be on the safe side I made sure to ice my knee and calve/achilles daily for the first few days. I had some easy NO Garmin runs and an amazing long run with a 50 minute slow tempo in the middle of it as preparation for the longer Sydenham 8km race which is only 3 weeks away.

Posted by Eliza Ralph-Murphy at 6:26 AM

not the sort of sign you see everyday around these parts!