My workout from yesterday 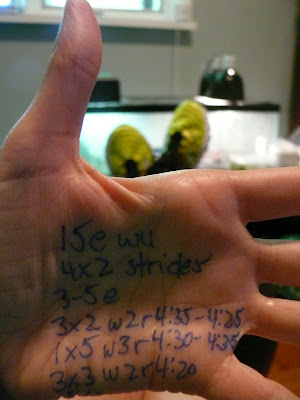 My workout from yesterday, 15 cd not showing(now you know how i got through highschool). Then I went and put sunscreen on and kinda smeared it all but was still legible enough during the workout.  It was hard but the "longish" recoveries helped me to hit all of the designated paces. It was my last real workout before my race on the 23rd other then a low end tempo run tomorrow. Legs are sore today...must rest!

I am approx. a week out from my second showing at Emilie's 5km Run in Ottawa. This year's build up for that race has turned out to been vastly different from last year's. Racing wise last year at this point I had run a snowshoe race, a 5km, an 8km(ran a pr by a few seconds), another 5km(and realized my ankle was cranky) then raced at Emilie's on a sore foot and ankle. I had also had a few other injuries including both my hips causing me some grief at various times and my ongoing foot calf ankle issue had me seeing a new physiotherapist, Stacee for treatment.

This year I ran the snowshoe race, the 5km(1min slower then last year), a 10km trail race(very fun race through the woods), the 8km I pr'd on last year I ran as a hard tempo using heart rate guidelines and was not running for time(2min slower). I was quite ill for a few weeks in March which put back my training by the same and a sore quad was an on again off again issue. This week I am finally feeling like I might have some "CONTROLLED" speed back after having spent many long slow hours on the hilly trails and roads of the Gould Lake Conservation area building base all winter. So after last night's progressive interval session I am ready to try Emilie's Run again. I am setting more realistic goals based on my training so will probably be starting out thinking I will try to run 22:30ish AGAIN...but will try to progressively run faster like I have been doing during my workouts and best case scenario will be a sub 22. No Sub-20s on the horizon this year anyhow but I really do think that miracles can happen. A better word for miracle in this case would be, "breakthrough" because I have had breakthroughs before so I know they do happen.

The thing is, one can never really know what it is your body is waiting for for it to take that leap of faith that allows a breakthrough to happen. Right now it is important for me to keep things real, keep fighting for every gain and/or fight back from every setback and being prepared for the idea that a breakthrough may never happen while at the same time BELIEVING IT COULD! There are no guarantees so I am enjoying the process and being satisfied with all that I can accomplish which is perhaps in the end even more important then running that ever elusive, "X TIME".
Posted by Eliza Ralph-Murphy at 9:03 AM

ahaha!! if i tried that, i would forget, wipe my forehead, and have ink all over my face!!

Yes well I pretty much rubbed it all over myself before getting out the door. I am always afraid I will mix things up like run 4x5min when I was suppose to run 5x4min. I am really just trying to avoid running too many repeats, too far with too little recovery.